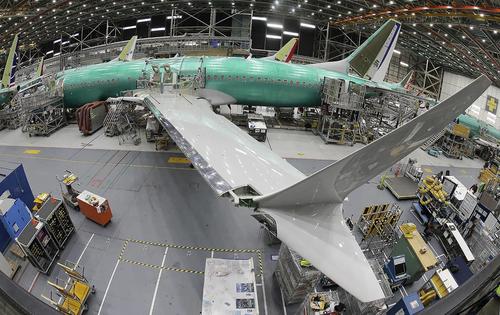 Boeing's troubled 737 Max returned to US skies last month. American Airlines was the first domestic carrier to fly the Max and has since operated more than 200 flights. While other domestic and international carriers gear up for a much wider re-launch of the aircraft, a former senior manager at Boeing's 737 Max plant in Seattle has published a new report warning that the Max is "still not fixed."

Ed Pierson, the report's author, retired from Boeing in August 2018 and worked at the Max factory in Renton, Washington, claims more investigations are needed into the aircraft's electrical system and production quality problems at the factory.

Pierson alleges that the US and European regulators have primarily ignored factors that he points out in the report, which may have played a role in Lion Air flight JT610 and Ethiopian Airlines flight ET302 crashes that killed 346 people. He links both crashes back to conditions at the factory in Renton.

"The paper underscores the likely role a chaotic and dangerously unstable production environment played in the accidents. Mr. Pierson also puts forth three other plausible accident scenarios not addressed in the accident investigations. The 14-page report includes a timeline and an analysis that ties the two 737 MAX airplane crashes together in ways not previously reported. Most importantly, Mr. Pierson's analysis raises serious doubts as to the safety of the 737 MAX. Alarmingly, the FAA's recertification fixes do not address the problems identified in the report," the report's abstract reads.

In late 2019, Pierson testified during a House Transportation Committee hearing on both Max crashes where he described the Renton factory as "chaotic" and "dysfunctional."

With the planes returning to the air, he is worried that Boeing and regulators have overlooked many of the issues he pointed out.

In the report, he believes the production defects of critical Max parts were defected when they entered service, adding that the aircraft's complex wiring systems may have contributed to the random deployment of the MCAS system in flight.

Pierson said the MCAS sensor failures contributed to both crashes but asked why they were happening to new aircraft.

All of this suggests, Pierson explained, "point back to where these airplanes were produced, the 737 factory".

Pierson's report was analyzed by famed pilot Chesley Sullenberger who said the "report is very disturbing, about manufacturing issues in the Boeing factories that go well beyond just the Max, and also affect… the previous version of the 737."

"Like electricity, Boeing and the FAA have taken the path of least resistance throughout the entire design, development, certification, production, and now recertification of the 737 MAX," Pierson said in the report.

"The design of the 737 MAX, MCAS software and the failure to provide vital information and training to pilots did not trigger these accidents. Neither did corporate decision making made years ago, unethical behavior, deceptive marketing, or a misguided leadership culture that prioritized profits over safety. Nor did deregulation, regulatory capture, or a completely broken aircraft certification process. In fact, all of these things contributed mightily to these tragedies. Unfortunately, every MAX airplane ever manufactured shares this same wretched history. The pilots are certainly not to blame. They did everything they could to save the lives of the people who trusted them. The triggering event for these crashes was a defective AOA Sensor part, and quite possibly, a malfunctioning electrical system stemming from a dangerously unstable production environment," he said."

Pierson concludes: "We can either investigate these production problems and fix them, or we can wait for another disaster."

737 MAX - Still Not Fixed by Zerohedge