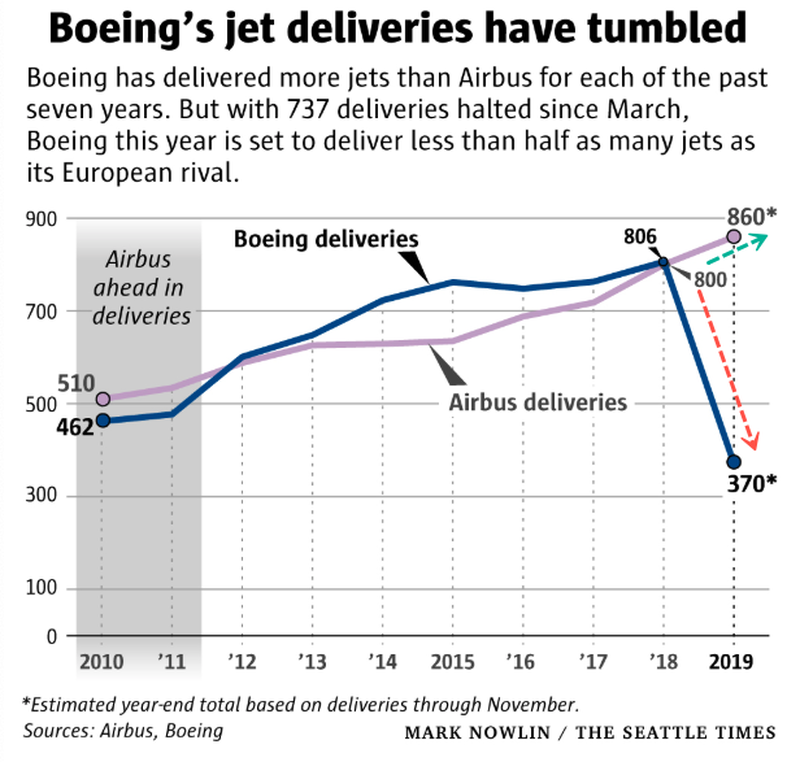 Airbus has become the world’s largest planemaker for the first time since 2011 after delivering a forecast-beating 863 aircraft in 2019, seizing the crown from embattled U.S. rival Boeing (BA.N), airport and tracking sources said on Wednesday.

A reversal in the pecking order between the two giants had been expected as a crisis over Boeing’s grounded 737 MAX drags into 2020. But the record European data further underscores the distance Boeing must travel to recoup its market position.

Airbus, which had been forced by its own industrial problems to cut its 2019 delivery goal by 2-3% in October, deployed extra resources until hours before midnight to reach 863 aircraft for the year, compared with its revised target of 860 jets.

Airbus declined to comment on the figures, which must be audited before they can be finalized and published.

Planemakers receive most of their revenues when aircraft are delivered - minus accumulated progress payments - so the end-year delivery performance is closely monitored by investors.

Airbus’s tally, which included around 640 single-aisle aircraft, broke industry records after it diverted thousands of workers and canceled holidays to complete a buffer stock of semi-finished aircraft waiting to have their cabins adjusted.

Airbus has been hit by delays in fitting the complex new layouts on A321neo jets assembled in Hamburg, Germany, resulting in dozens of these and other models being stored in hangars to await last-minute configurations and the arrival of more labor.

Such out-of-sequence work drives up costs and could have a modest impact on Airbus profit margins, but the impact will be largely blunted by the high volume of planes and already solid profitability for such single-aisle aircraft, analysts say.

Boeing delivered 345 mainly long-haul jets between January and November, less than half the number of 704 achieved in the same period of 2018, when the MAX was being delivered normally. For the whole of 2018, Boeing had delivered 806 aircraft.

Airbus production plants traditionally halt over Christmas and New Year. But the company’s delivery centers and completion facilities were humming well into the afternoon of New Year’s Eve to allow Asian and other airlines to fly away new jets.