Less More
5 years 9 months ago - 5 years 9 months ago #359 by Mark
Stuck In Air Mode was created by Mark
Weird problem…… After the aircraft arrived at gate, the crew was having a difficult time of doing their post-flight shutdown. Among some of the problems noted was that the captain could not turn off the center tank pumps and the Hydraulic Panel was displaying “Select Manual” for controller operation. There were other anomalies visually noted, although with the crew describing the problems, I didn’t get a chance to account for them all.

One thing that “was” absorbed, was a crew comment about the ADI airspeed tape not switching to a ground mode display (I’m assuming all the V-Speeds go dashes). For simplicity sake, the crew just wrote up their most noted fault which was that the Auto-Ground Spoilers did not deploy (they moved the handle manually).

What do we have going on here???? We’ve got an aircraft still stuck in the air mode…… or at least partially.
There were no crew bitches about Thrust Reversers, Anti-Skid, or Auto-Brakes. I noted the outflow valve was open (which “should” go open upon landing).

The first thing any Douglas mechanic is going to try to do is disconnecting the scissors to simulate air mode by pushing down on the upper arm (simulating weight off the nose gear with full strut extension). After several cycles, the problem remained. The issue only cleared after a complete aircraft power dump. 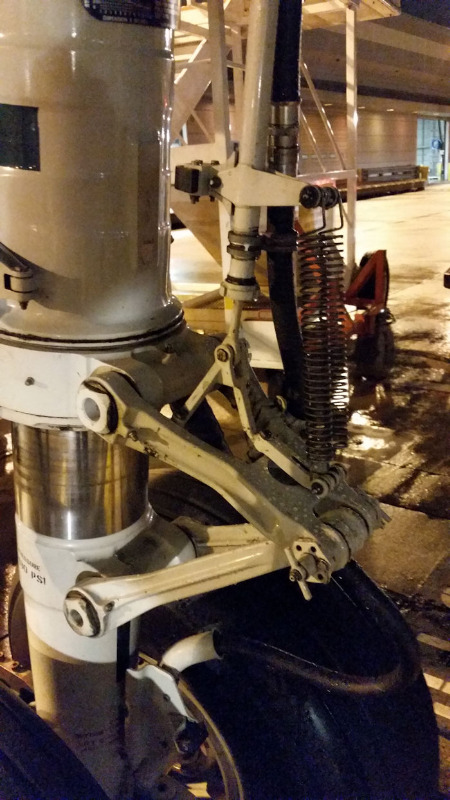 For people not familiar with how McDonnell Douglas built aircraft…… air-ground switching is accomplished by using a cable attached to the upper scissor rod. Depending on strut extension, (short with weight on – long with weight off), this cable actuates two fairly large switches in the forward electronics compartment. These switches control a shit-load of air-ground relays that feed all the separate systems needing air-ground information. This system has been used on all MD products from the DC-8 on through to the MD-11. 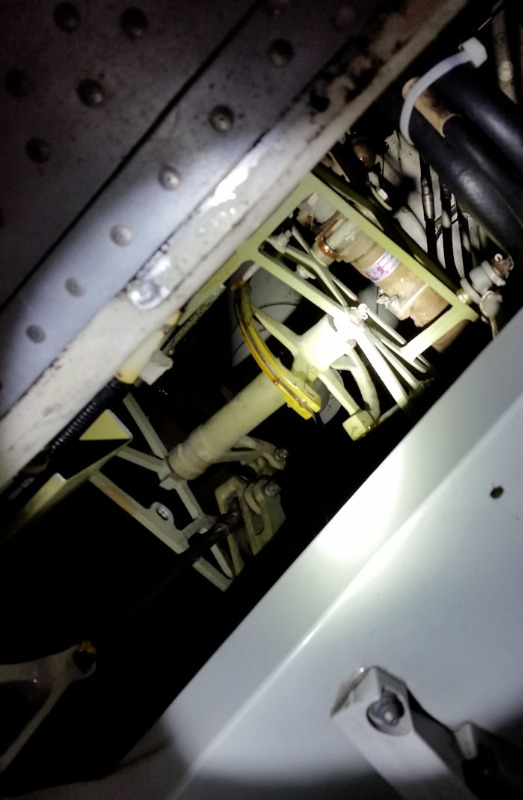 (In this view we're looking towards the top of the strut. The upper link rod is located on the left. The cable is visible on the right wrapped around the bell crank.)

After some digging for information, the CFDS was accessed to look at flight fault history. Both FCC’s showed this. 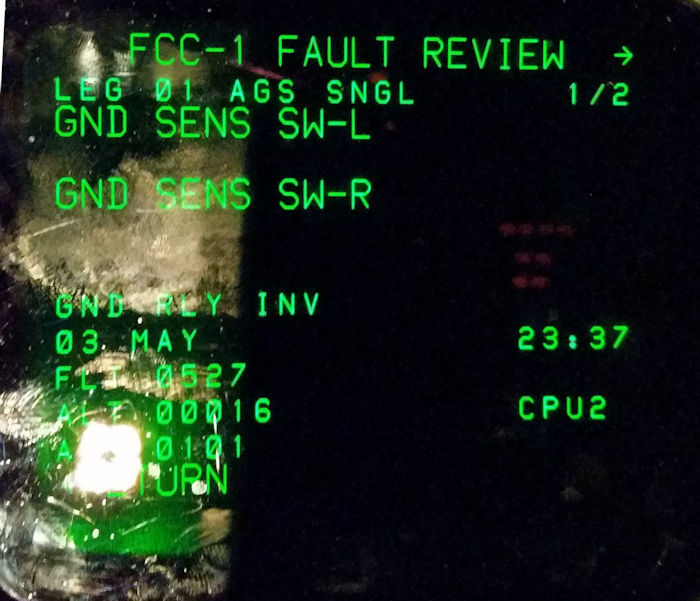 Of all the air-ground relays, R2-5209 (Left Ground Sensing) and R2-5112 (Right Ground Sensing) feed the FCC’s. Each FCC gets input from “both” relays. Obviously, one of those relays was wrong.

What was puzzling was the fact that all the air-ground relays are controlled mechanically via the strut, cable, and switches mechanism. If we had something stuck, wouldn’t cycling the upper scissors arm correct the problem? Why did only the power dump correct the problem? I don’t have an answer, but I “will” be watching the aircraft for a while.

Less More
5 years 9 months ago - 5 years 8 months ago #360 by Mark
Replied by Mark on topic Stuck In Air Mode
A couple more pictures. 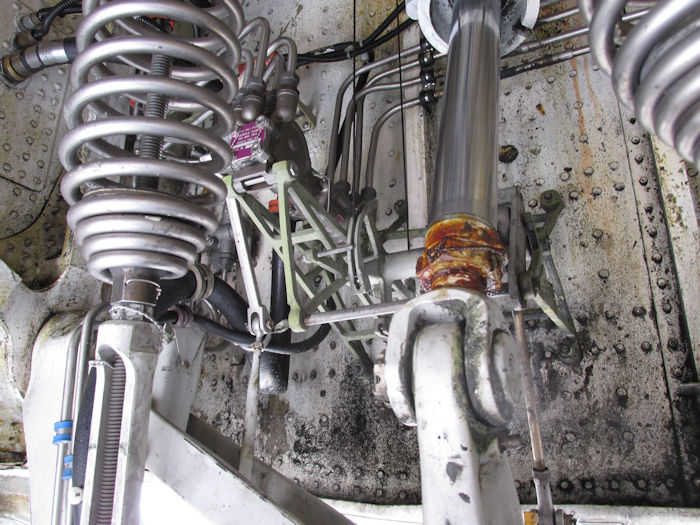 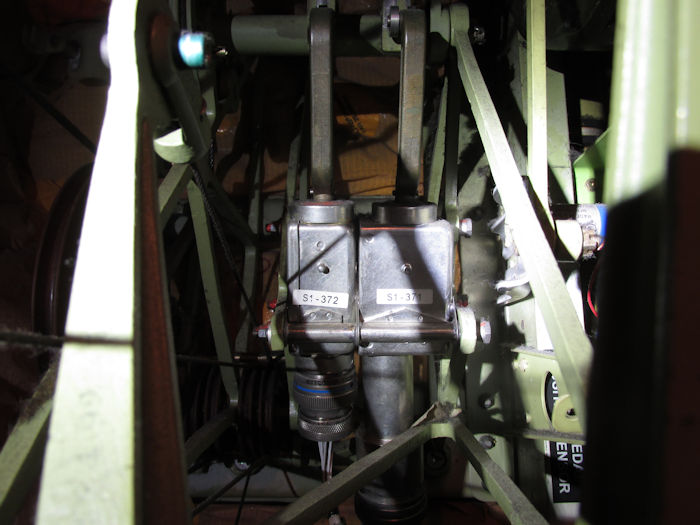 Air-Ground switches in the forward left of the E&E compartment. The rocker arms can be seen at top of picture. These arms are actuated by a cam driven by the cable.

The problem "did" repeat on the third landing after we kicked it out of town. The item was still open when I last checked it.

Less More
5 years 8 months ago #361 by jake ounce
Replied by jake ounce on topic Stuck In Air Mode
We have a sloped ramp, and once in awhile the plane goes into Air Mode when the tail tilts down. First time it happen we couldn't get the main cargo door to open, but the lower doors worked. After digging around, we realized it was in the Air Mode-easy to overlook with the plane parked without focus on nose gear chrome extension.

Less More
5 years 8 months ago #366 by Mark
Replied by Mark on topic Stuck In Air Mode
Well, that's funny you said that. The aircraft that caused this write-up also had a main door issue. No hydraulics, but it wasn't an air-ground problem (popped breaker found later). We've got all this crap going on with the aircraft and we're having to pump the damn door up and down while dealing with our other problem. (It was raining, two openings - two closings.)

From the time I had this aircraft on 5/4/17. (I didn't dig hard and I'm sure there's a few more write-ups lurking in some other ATA's.)

5/4 - ON LANDING SPOILERS ONLY 2/3 VICE GROUND. AIRCRAFT REMAINED IN FLIGHT MODE FOR 2 MINUTES AFTER LANDING. (REFERENCE WRITE UP 04 MAY)

5/9 - SPOILERS WENT TO 2/3 BUT DID NOT FULLY DEPLOY ON LANDING.(Spoiler actuator change)

5/11 - AFTER LANDING WE HAD A LEVEL ONE SEL CAB PRESS SYS MAN ALERT.

It's funny, but NOT, that a problem is allowed to go on for so long without anybody understanding the damn issue.

How does something like this go on for over two months.

FedEx does not have a Tech Support Department. They let Maintenance Control coordinate maintenance, parts, and (supposed) troubleshooting. The amount of money absolutely wasted on parts alone is unbelievable.

I'm going to watch this cluster fuck for a while. I stated the issue in my original sign off. A crew member stated the same thing. This aircraft has a AIR/GROUND problem. So far just one wasted Spoiler Actuator, but I know more parts are coming.
Last edit: 5 years 8 months ago by Mark.

Less More
5 years 8 months ago #382 by jake ounce
Replied by jake ounce on topic Stuck In Air Mode
Don't feel so bad, I can top that one, with a 747 lav problem that continued over a year as part after part got thrown her way. Finally fixed. I work nights, and all the support people are home?? Makes no sense when you need a specialist and he's home in bed! Cluster fucks happen all the time here to, so don't feel left out Mark!!