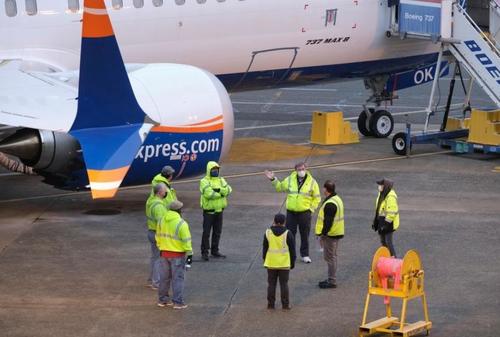 The FAA isn't done punishing Boeing for the oversights (later revealed to be systemic) that led to the devastating crashes of two Boeing 737 MAX 8 jets, killing roughly 350 passengers and crew.

According to a WSJ report, the FAA is launching a "broad review of how Boeing employees handle safety matters" after several company engineers told the agency they had faced "undue pressure" to skirt over them.

The FAA survey, conducted this year, revealed that 35% of a small sample of certain Boeing employees reported problems including pressure and hurdles to transparency, according to an Aug. 19 agency letter to Boeing that was obtained by WSJ. Some surveyed employees, who are part of a group empowered by the agency to assist with its work, said they encountered difficulties in being transparent with regulators.

As WSJ explained, aviation regulators have long relied on engineers to act on the agency's behalf when performing certain tasks, especially when it comes to signing off on safety assessments. Any lapses in Boeing's safety overviews should have been anonymously reported to the agency. Yet, as we learned more than 18 months ago, engineers working on the 737 MAX 8 resented their managers, and privately complained to one another about the shortcomings of their oversight - without ever saying a word to the FAA.

According to the letter seen by WSJ, the survey indicated that some 35% of the small sample of Boeing employees surveyed complained to the agency that their work environment "does not support independence" of those who are empowered to act on the agency’s behalf, according to the letter, which was signed by Ian Won, acting manager of the FAA’s Boeing oversight office in the Seattle area.

In the aftermath of the 737 MAX 8 crashes (which famously led to the plane being grounded for more than a year) WSJ's reporting revealed that the FAA had effectively let Boeing regulate itself following an unprecedented incidence of "regulatory capture."

Yet, now we're learning that the "problems cited by Boeing employees in the survey 'indicate the environment does not support independence' of those who are empowered to act on the agency’s behalf, according to the letter, which was signed by Ian Won, acting manager of the FAA’s Boeing oversight office in the Seattle area."

The two-page letter came with excerpts from interviews with Boeing employees. The employees, who were quoted anonymously, told the FAA that the pressure they felt wasn’t necessarily overt and could also come from the engineering ranks pushing to stay on schedule.

"I feel undue pressure but I stand up to it," one Boeing employee was quoted by the letter as saying.

The FAA letter said that "Boeing’s company culture appears to hamper" its FAA-empowered employees "from communicating openly with the FAA." The letter cited one Boeing employee who told the agency: "I am very aware that my bringing up issues is not appreciated."

A Boeing spokesperson said the company "takes these matters with the utmost seriousness" and is working to bolster the independence of its employees who work on the FAA's behalf.

"We have consistently reinforced with our team that delegated authority is a privilege and that we must work every day to be trusted with the responsibility," she said. Boeing has directed that its FAA delegates "must be accorded the same respect and deference that is shown to our regulator."

Unfortunately, the problems cited by the August letter are all too familiar: they're the same issues that were identified by an internal company report that was obtained by Congress during its investigation into the two deadly crashes, which took place in October 2018 and March 2019.