Less More
7 years 11 months ago - 7 years 11 months ago #62 by Mark
Circuit Breaker Trip was created by Mark
Troubleshooting a system short that is causing a circuit breaker trip is usually a simple task. The majority of times the problem can be quickly traced to component or computer. There are times when a quick fix is not forthcoming, especially when it has an intermittent occurrence. Isolating this type of problem requires a considerable amount of "digging."

In this case, the "Warning Lights Power #7" circuit breaker on a GIV was causing problems for the crew. Maintenance could not duplicate the C/B trip on the ground. 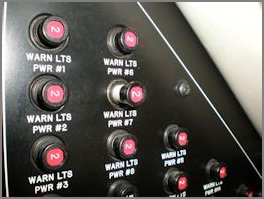 Current draw for this circuit is normally well below the 2-amp C/B's rating. The warning lights power breakers installed on Gulfstreams power "many" sub-systems. To properly troubleshoot , "each" sub-system's current draw should be measured individually.

Being that this is a "over current" issue, the first thought is to grab an Amp Clamp, which is a great tool for high draw items. One could be used, but the large clamp size is not feasible with small wires in cramped quarters. 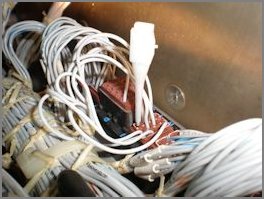 The best option for current measurement that is less than 10-amps is the VOM. The better Fluke models can measure current in this range. This is a "fused" measurement. Meter fuse ratings should be noted before use.

When measuring current, the meter is "in the circuit." One test lead wire must be moved to the "A" test socket while the other remains in the "COM."

"All" wires are hot when testing amperage. Any bare test leads or wires should be protected from metal or skin. 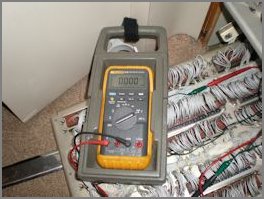 Jumper or test lead polarity plays a negligable part when testing current on aircraft. The main concern is the meter "value" for current not whether it's positive or negative.

In this picture, one jumper is connected to a removed terminal block pin (main input from breaker), the other to a wire with a pin crimped on one end and inserted into the block.

Nominal value for this particular problem was less than 12mA or .012-amps. 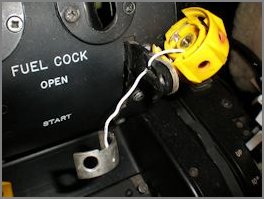 This aircraft's actual fault was found to be the right HP fuel lever light assembly. Static current draw was 0-amps, but when the #2 fire warning was tested, the reading jumped to 2.11-amps. This did not pop the breaker. When the assembly was wiggled, the breaker popped.

After the unit was disassembled, it was found cracked internally. The positive bulb socket ring was touching the lever arm itself.