Less More
3 years 8 months ago - 3 years 8 months ago #398 by Mark D Francis
ATA 29-12, MD-10-10 Hydraulic Pressure Low was created by Mark D Francis
We recently had a MD-10 with a crew complaint on spoiler deployment. While running the electric hydraulic pumps to deploy/stow the spoilers, I had a non-avoidable discrepancy dealing with the #1 hydraulic pressure. With spoiler handle movement, the pressure on the #1 system was consistently 500-700psi lower than the #2 and #3. This was accompanied by the indication going amber. (The pressures are pretty close in the image below. This is a recovery phase with no spoiler movement and pressures climbing.) 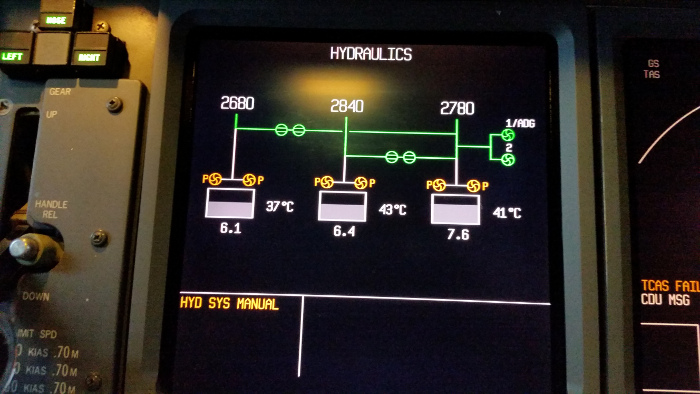 So what could I be dealing with, a bad indication or a bad reversible motor pump? What did I "hope" it was?

There is one quick way to verify the fault in this case. Turn off the electric pumps and crank an engine to be used as a pressure source. The engine does not need fuel applied. The starter alone will fully pressurize the engine driven pump(s).

In the case of this aircraft, with the #1 engine spinning I had 2900psi and it only dropped a hundred pounds while moving the flight controls.

There is no way two electrical pumps will ever generate the power of an engine driven pump. With the electric pumps, all the pressures will be low, but not to the level that was noticed with the #1 system. It is also a testament to the strength of the starters.

Less More
5 months 1 week ago #734 by Rabin
Replied by Rabin on topic ATA 29-12, MD-10-10 Hydraulic Pressure Low
It's great that you put your thought process here and not just the fault and corrective action. Thanks for all the info mark!

Less More
5 months 1 week ago #735 by Mark D Francis
Replied by Mark D Francis on topic ATA 29-12, MD-10-10 Hydraulic Pressure Low
To be honest.... I was trying to eliminate a hydraulic reversible pump change. Fairly nasty job in center wheel well. We had to change it anyway.